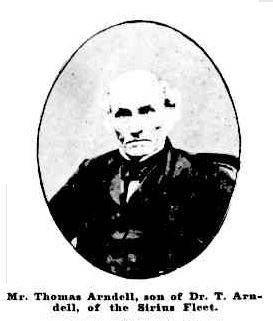 Thomas Arndell junior married Sophia Loder in 1824. They resided at Cattai on the Hawkesbury.

W. Allan Wood in the Dawn in the Valley records that 'Thomas junior was granted 300 acres in two portions at the junction of Greig's Creek with the Hunter River. He later purchased areas of 1033, and 400 acres situated across the river from the Church and School lands which lay between Dalswinton and Wollun Hills.

2). Thomas was a brother of James Arndell of Woodlands.