William Maxwell Shaw Stewart of the 62nd regiment brought with him to Australia recommendations from Lord Bathurst for a grant of land. He was granted 2060 acres of land in February 1825.


Brief Stay in the Colony

Shaw Stewart remained in the colony less than two years. His time in the colony can be traced in various newspaper articles in 1825 and 1826

In correspondence to the Sydney Gazette on 5th May 1825 he claimed to have introduced the first pheasants to the colony and in August 1825 he gave his address as 'Lochnagar'.

In September 1825 Captain Shaw Stewart was thanked by Nathaniel Payten of Parramatta for his actions in using the greatest judgment, coolness and presence of mind in extinguishing a disastrous fire that took place at Parramatta. [1]

The following month, October 1825 he decided to return to England. He was selling two valuable horses, household furniture consisting of bedsteads, bedding, tables, cabinets etc[2]. His premises in Phillip Street Parramatta comprising a cottage, nearly new, an elegant pheasantry and two stall stables with ground under a thriving plantation were also offered for sale [3]

In an advertisement in the Sydney Gazette dated 5 April 1826, his 2000 acre estate at the Hunter River was offered for lease -

To New Settlers....To be let and entered upon immediately, all the whole of that valuable estate called Loch-Na-Garr, comprising 2000 acres of excellent land. The estate is beautifully situated in the immediate vicinity of Wallis Plains, and will be let for a period of of nineteen years. The whole of the moveable property instantly to become bona fide, the property of the Tennant. The whole of the live stock together with their increased comprising 14 well improved dairy cows with calves to become property of the tenant, four working bullocks, an excellent dwelling house, bed room and parlour, stockyard, two excellent huts for six men now on the property, one new dray, plough and harrow, bullock harness , new; together with two sets of clearing instruments, grind stone etc., 100 rod  and upwards of the side line fenced in ; together with a great quantity of poultry consisting of turkeys ducks and fowls. Thirty acres of rich fine land had been felled and was ready to lay down a crop. 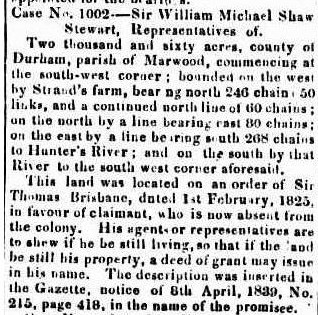