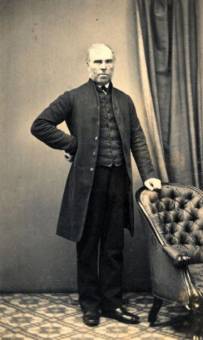 Robert Dixon was born in Darlington, Durham, England in 1800. He arrived in Van Diemen's Land on the Westmoreland in 1821 and came to New South Wales in 1826 where he was employed as assistant surveyor in the Surveyor General Department. He surveyed land throughout the Hunter Valley and Liverpool Plains in the following decade.

In 1831-32 Robert Dixon carried out surveys in the Upper Hunter and New England districts, and in October 1833 was sent to trace the ranges between the Lachlan and the Macquarie Rivers. He did not stick closely to his instructions but followed the unexplored Bogan River for sixty-seven miles (108 km) and later returned to Bathurst without having seen any of the high land that he had been sent to investigate.

In 1836 he applied for a leave of absence to return to England and as he intended to return to Australia wished his extensive services within the department to be recorded.

The following testimonial can be found in the Historical Records of Australia, Vol. XVIII, p. 454......

Sir, In attention to your letter of 11th Instant No. 36/578 referring to the application of Mr. Dixon herewith returned for leave of absence to proceed to England, I have the honor to report to you for the information of His Excellency The Governor, that Mr. Dixon has served in this Department nearly Ten years, during which time he has been employed in many very important Surveys, and I have much pleasure in adding that as far as my observation goes he has performed all the duties with which he has been entrusted in a manner satisfactory to the public and to the head of this Department, as well as highly creditable to himself. Enclosed is a detailed statement of services, which I trust will be sufficient to ensure him His Excellency's favorable consideration of his case.
I have. etc,

Robert Dixon embarked on the Abel Gower for London in August 1836.

He returned to Australian on the City of London in July 1838 however was refused reinstatement by Surveyor-General Sir Thomas Livingstone Mitchell.

On 31st January 1839 The Australian announced that Moreton Bay was to be thrown open for selection and that a party of surveyors under Robert Dixon were to proceed there to prepare the necessary surveys.

On 24 July 1839 at Moreton Bay he married Margaret, daughter of John and Ann Sibly of St Neot, Cornwall. Margaret Sibly was the younger sister of Grace Sibly, wife of surveyor Henry Dangar.

The following statement outlining Dixon's services can be found in the Historical Records of Australia, Vol. XVIII, p. 454

Sir,
With reference to your memo, of 15th Inst, requesting to know the date of my appointment, also the several general instructions received by me, and the nature of the duties consequent thereon, in order to enable you to reply to the Colonial Secretary's letter No. 36/578, I have the honor to inform you that I joined the Surveyor General's department as Assistant -Surveyor in September 1826. My first employment was about Sydney and its environs, after which I proceeded to Illawarra in an open Boat and surveyed the Coast from thence to Botany Bay, taking up Port. Hackery, the Southern Shores Botany Bay. George's River and its branches. I was then ordered to survey the unmeasured grants in the Cowpastures, and to extend the survey to Burragorang. Werraberri Creek, the Notai River, part of Coxes river, the Warragumba find the Wollondilly to Goulburn Plains. which I accordingly did: this includes the principal duties performed under Mr. Oxley.

My next instructions were from Major Mitchell to join him in the Trigonometrical Survey of the Colony, when I accompanied him over the Southern districts on that duty and have since extended angles over the whole Colony.

In the interim I completed the trace of the principal features South and South West of Goulburn Plains, including Lakes Bathurst and George, the Molonglo River, part of Murrumbidgee, the Yass River, Narrawa and Lachlan Rivers, and several of their branches, as well as the dividing range from Burrah Burrah to Lake George, and also a great many Grants in the Southern Counties.

My next movements were in the Western Districts, where I completed a detailed survey of the whole Mass of broken country between Mount Victoria and Bathurst, previously to Major Mitchell's laying out the new line of road between these points; after which I was engaged in measuring grants in that neighbourhood and on the Lachlan River, etc. These were the principal Instructions received and duties performed by me up to the beginning of the year 1831 : but there were many works of minor importance, particularly farms in the County of Cumberland, etc.

In the year 1831, I received instructions to proceed to the Upper Hunter River districts for the purpose of laying down the principal features in the North West Districts. I commenced by measuring a Base line on Liverpool Plains of three miles in length, from which I fixed the principal heights in that part of the Colony, and was enabled to connect, these points with the former Trigonometrical Survey. I then traced the whole of the dividing range from the head of the Coolahburragundy Stream to Mount Royal, and thence to Mount Arthur. I then took up the survey from the head of Page's River across Liverpool Plains to Peel's River, shewing the courses of the principal Ranges and Streams in that country: after which, I laid down the Whole of the Upper Hunter's River from its confluence with the Goulburn to its source, including its several branches, the Page, Kingdown Ponds, Dart Brook, with many minor tributaries and a great number of Grants and purchases thereon. I also completed a detailed survey of the country between Patrick's Plains and Muscle Brook, likewise between Lemmington and Muscle Brook, shewing the old lines of road between those points previously to the Surveyor Generals making the new line of road from Lemmington to Muscle Brook, which line I have since surveyed. I was then engaged in the survey of the principal streams in the Counties Brisbane and Bligh, viz., the Wybong, Gungal. Gummum, Bogibri. Krui, Munmurra, Talbragar and Coolahburragundy. with the whole of the Grants and purchase on those Streams with a few exceptions.

In the Month of October, 1833, I received Instructions from Major Mitchell when at Maitland to go to Wellington Valley with my equipment and from thence to explore the unknown country laying to the West, winch I accordingly did, and reached the Bogan, followed many miles down that river, and returned to Wellington Valley after having travelled upwards of six hundred miles since my departure from that station. I then came to Sydney for the purpose of re-fitting my equipment.

In the Month of May. 1834, I left Sydney for Upper Hunter's River, where I have been employed principally in the measurement of lands for sale and have surveyed since that date two hundred and forty six thousand, eight hundred and ninety Acres of Land. I have also traced the river Isis, and marked and surveyed a new line of road from Muscle Brook to Liverpool Plains with many other surveys, and, since the period of my appointment, I have not had more than two months' leave of absence from duty.

2). Two of Robert Dixon's Sketches, View of Gummun Plains and Liverpool Range, N.S.W. Taken from Brindley Park (1835) and A View from Camden on the River Nepean, N.S. Wales (undated), were published as lithographs in 1837 by Webb and Son of Snow Hill, London.

5). This map of the colony of New South Wales : exhibiting the situation and extent of the appropriated lands ... dedicated to Sir John Barrow ... by ... Robert Dixon / engraved by J.C. Walker

6). Other colonial surveyors mentioned on the Free Settler or Felon site include: