In 1859 Maurice Magney, formerly of the California Hotel, announced that he had rented extensive premises near the Market Wharf which he had fitted up in first rate style and opened as The Market Wharf Inn. Breakfast 1s 6d; Dinner with a good glass of ale 1s 6d. tea, 1s 6d. bed, 1s. 6d. etc. The premises had originally been built as stables.

In July 1859 it was reported that Maurice Magney had built a large room 60 feet by 24 near the Inn that could be used for a concert room or public meetings. [1] Magney himself referred to it as a casino and advertised for a pianist and a comic singer as vocalist to be employed there. [2] No expense had been spared with regard to decor and soon the rooms were named Princess Theatre. Magney would allow travelling performers to rent the premises for suitable purposes and offered reduced rates of accommodation at his Inn for the performers. Mr. Holloway being about the first to play there in the Hunchback. The theatre was run on London music hall lines. [3]

On Saturday mornings scores of settlers assembled at the Inn for the purpose of disposing of their produce. The Inn also became a prominent land mark for those embarking on harbour ferries.

Later the Princess Theatre was used as a produce store for John Burke and also Captain Weatherill used it as a ship chandlery store. [4]

Elaborate Boxing Day celebrations were held at the Inn in December 1860 - an old English sports day at the rear of the Inn, a performance in the Princess's Theatre in the evening to be followed by a free ball in the Saloon. 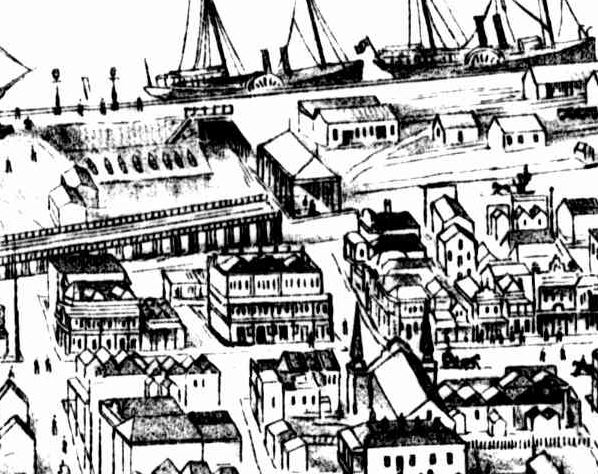 Section of a map of Newcastle c. 1889 showing the corner of Market and Scott Streets and the Market Wharf. Illustrated Sydney News 1889

Meetings were also often held at the Inn or the Princess Theatre, the Volunteer Fire Brigade being one of the first.

In February 1861 an historic miners' meeting was held in the Princess Theatre of the Market Wharf Inn. The miners intended to hold the mass meeting on the flats near St. John's Church but rain prevented it and Maurice Magney, put the theatre at their disposal. Following the meeting the men formed a procession and marched through the town with a banner and band of music. Over 1000 men were present. The object of the meeting was to form an association for protection in case of strike or turn out and to regulate the daily wage of the miners employed in the collieries of New South Wales. James Fletcher whose statue is so well known in Newcastle, was elected on the day and presided over the meeting and parade. Sydney Morning Herald 21 February 1861

Coroner's Inquests were also held at the Inn at various times.

The Princess Theatre being attached to the hotel, 'Free and Easies' were often held there with Maurice Magney as chairman, and the company supplying their own artists and buying their refreshments from the hotel between times. This type of entertainment was favoured by Scottish miners of the era. [5]

In July 1861 the attraction billed at the Princess Theatre were Mr. Frank Short, the favourite comic singer who was to sing 'Will Ye Haver Go Home' and 'My Johnny Was A Cob-li-er'. Mr. W. Cleveland, the renowned Lancashire clog hornpipe dancer was to perform several times throughout the evening.

The Free and Easies were very popular but were contrary to the Licensing Act and hotel keepers who organised them were liable to large fines.

It is not known whether Maurice Magney was ever fined for holding Free and Easies, or whether his downfall came by other means, however he was declared insolvent in 1861 and seems to have lost everything once again.

In 1863 the Lease of nine years together with Good-Will, Furniture, Stock etc was advertised for disposal. Description: The Property stands in the best position in the city doing a first rate business, and will be enhanced in value considerably when the whole of the Sydney steamers are placed at the foot of the street within 100 yards of the house. [6]

The old Market Wharf Inn was demolished in September 1897 and a new Hotel was built in conjunction with the Cohen Warehouse. It was to be two storeys high with a 90ft frontage to Market Street and would be occupied by Mrs. Short who was to carry on with the license throughout the building of the new hotel.

The ground floor comprised a public bar, private bar, four parlours, a large dining room, kitchen, wash house, mens' room and sanitary conveniences. The first floor comprised one large drawing room, 10 bedrooms, two large bathrooms and lavatory. Corridors of 8ft and 5ft in width gave direct access to all the apartments named. The lavatories were of marble. Floors of the vestibule, bathrooms and lavatories were tiled with tessellated tiles, bedded on concrete vaulted between steel joists. The fittings throughout were of cedar and the glazing of the principal doors and windows were of cathedral glass. The old-fashioned lath and plaster partitions were dispensed with and any partition walls of the first floor not meeting with perpendicular support by the walls of ground floor are built of solid brickwork on steel girders. A chastely designed colonnade and balcony 12 ft in width occupied the whole length of frontage. The exterior of the building was faced with double pressed bricks, tuck pointed, and had alternate stone and cement dressings. Mr. Frederick B. Menkens was the architect and acted on behalf of Mr. A. A. Dangar who owned the premises [7]

There was a white marble tablet at the Market-street entrance bearing an inscription which showed that the building was erected and named the Shortland Hotel in 1897, the centenary year of Newcastle. [8]

In February 1898 Isabella Short was granted permission to change the sign of her house from the Market Inn to the Shortland Hotel [9]. Doors were open to customers in April 1898

The first meeting of the Newcastle Agricultural, Horticultural and Industrial Association (The Newcastle Show) came into being on Friday 17 March 1899 at a meeting in the Shortland Hotel. Fourteen men attended, two being Charles Frogley and Sir Samuel Cohen. [10]

In January 1908 the Shortland Hotel was partially destroyed when David Cohen warehouse caught fire, part of the warehouse falling in on the roof of the Hotel. In November of the same year it was announced that the Shortland Hotel had been re-instated, altered, and another story added to it. A roof garden was one of the new features, being of Neuchatel asphalt on a concrete and steel foundation. This was the first roof of its kind in Newcastle. There were still 20 bedrooms and a large dining and sitting room on the first floor. The Hotel was refurnished throughout, F G. Castledon was the architect. [11]