Surgeon Philip Toms joined the Maitland at Deptford on the 3rd March 1840 and on the 8th after the guard embarked the ship proceeded to Woolwich and on the following day 200 male prisoners were received from the Justitia and Warrior hulks. The ship proceeded to Sheerness on the 10th and 110 more prisoners were received on the 12th from the Fortitude hulk at Chatham, five of the prisoners however were afterwards disembarked by order of J. H. Capper Esquire, Superintendent of the Convict Establishment, Whitehall, leaving a total of 305 convicts on board. 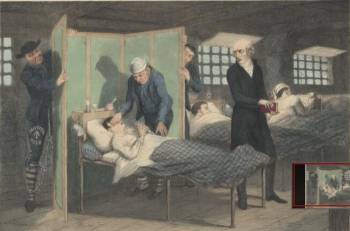 From the time of embarkation on the 8th March until the beginning of July, six prisoners only were placed on the sick list, all the other prisoners having enjoyed remarkable good health during the passage and as we were now so near our destination I fully anticipated them being landed without any deaths, but about this time eight or ten of the prisoners presented themselves with symptoms of scurvy and one of that number terminated fatally on the 14th July, a few hours after our arrival at Sydney. The other cases did well, but four of them not being sufficiently recovered to go into Barracks were sent to Hospital in a state of convalescence, the others having quite recovered were landed with the remainder of the prisoners on 22nd July.

I regret to add that in addition to the death above alluded to, two of the prisoners accidentally fell over board during the passage and were drowned, one of them viz James Rhodes on the 25 April and the other Henry Windward on the 27th of the same month.

The Maitland arrived off the Heads on 12 July however because of contrary winds didn't enter Port Jackson until 14 July 1840.

The printed indents include name, age, education, marital status, family, native place, trade, offence, when and where tried, sentence, prior convictions and physical description. There is no indication where they were assigned.

Philip Toms departed the colony in August 1840 on the Pilgrim bound for Liverpool with Drs. McKeckney and Mahon.

1). Select here to read about Samuel Gatward written by researcher Terry Gatward. Samuel Gatward was born at Luton Bedfordshire in 1800. He was transported twice - the first time to Bermuda and the second to New South Wales on the Maitland. He was last heard of in the Cassilis district (ContactTerry Gatward) 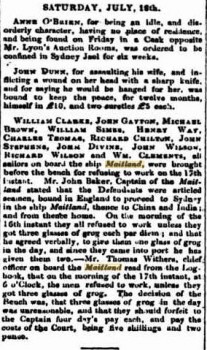 [3] National Archives - Reference: ADM 101/46/1 Description: Medical journal of the Maitland, convict ship from 3 March to 22 July 1840 by Philip Toms, surgeon superintendent, during which time the ship was employed in passage to New South Wales with 305 male convicts