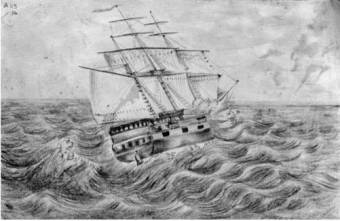 On 20 November 1834, 100 male convicts were transferred to the Lady Nugent from the Justitia Hulk and 60 from the Ganymede Hulk at Woolwich, all in apparent good health. On the 26 November, 100 were sent on board from the Fortitude Hulk at Chatham and twenty six convict boys from the Euraylus Hulk at Chatham making the total number of convicts 286.

Soldiers of the 50th regiment formed the Guard on the Lady Nugent.

Oliver Sproule kept a Medical Journal from 7 November 1834 to 27 April 1835. He recorded in his journal the weather conditions they experienced in the first two weeks:

'In the course of the first week or ten days at sea, there were eight or nine on the sick list with catarrhal affections and one with dropsy which I attribute to the cold and wet we experienced during that period beating down channel. Indeed the foremost berths in the prison at this time were so wet from leaking in that part of the ship, that I was obliged to issue dry beds and bedding to a great many of the prisoners to preserve their health, but after crossing the Bay of Biscay the weather became fine and we got the damp beds and blankets dried, the leaks partially stopped and the prison well aired and ventilated which, I am happy to say soon manifested a favourable change in the health and appearance of the men.

Besides the cases given in the journal I had a great many others to treat, some of them similar to those mentioned but the greater part consisted of boils, scalds, and contusions which would not only be too tedious to enter but I fear would be irksome to the reader. There were four births on board during the passage which did well, therefore I did not consider it necessary to give a detailed account of them in my journal the more especially as they were all favourable cases.

Regularity and cleanliness in the prison, free ventilation and as far as possible dry decks turning all the prisoners up in fine weather as we were lucky enough to have two musicians amongst the convicts, dancing was tolerated every afternoon, strict attention to personal cleanliness and also to the cooking of their victuals with regular hours for their meals, were the only prophylactic means used on this occasion, which I found to answer my expectations to the utmost extent in as much as there was not a single case of contagious or infectious nature during the whole passage with the exception of a few cases of psora which soon yielded to the usual treatment. A few cases of scurvy however appeared on board at rather an early period which I can attribute to nothing else but the wet and hardships the prisoners endured during the first three or four weeks of the passage. I was prompt in my treatment of these cases and they got well, but before we arrived at Sydney I had about thirty others to treat.'

The Lady Nugent arrived in Port Jackson on 9 April 1835 with 284 male prisoners. Two men had died at sea - William Atkins the younger and James Rowland. Robert Owen died in the general hospital at Sydney on 15th April.

The prisoners were landed on 27th April 1835 and marched to Hyde Park Barracks prior to being assigned. Ten were under the age of 14 years and may have been sent to the Carter's Barracks.

The Lady Nugent departed for Batavia in May.

3). Prisoners and passengers of Lady Nugent identified in the Hunter Valley region

5). Major Frederick Campbell Montgomery was Police Magistrate at Hyde Park Barracks in 1839. He came under scrutiny from the press for his decision to illegally flog three convicts in April 1839 and it was reported in the Sydney Gazette that he returned to his regiment in August 1839. [1]