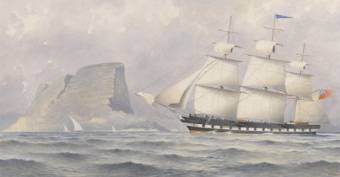 William Mackenzie Saunders was employed as Surgeon Superintendent on the convict ship Norwood from England to Fremantle in 1867. He kept a journal from 11 March 1867 to 29 July 1867 -

On joining the ship, he established a strict daily routine to be followed throughout the voyage:

6am - To commence washing persons - by divisions

7am - Water and biscuit to be issued

8.45 - Surgeon Superintendent will see the sick

8.45 - Prison deck to be cleaned - one man from each mess in rotation cleaning his own mess, bottom boards up

9.30am Prison deck inspected and then prayers

10am - Half on deck - remainder at school

2.30 - School for those on deck in the forenoon

3.45 - School to break up, messmen to muster on deck to receive salt meat for next day

5.30 - Down all beds and hammocks to be made up for the night the Surgeon Superintendent will see any sick

Tuesdays and Saturdays - all to be shaved

The Inquirer and Commercial News, Perth gave an account of the voyage when the ship arrived at Fremantle.......

The convict ship Norwood Captain Frank Bristow, anchored in Gage's Roads at 6.30 pjn. on Saturday, 13th; Dr. Saunders, Staff Surgeon, R.N., Surgeon Superintendent, and Mr. Irwin, Religious Instructor; having on board a guard of 30 pensioners, 18 women and 30 children, 4 war- ders. with their families, and 253 convicts.

The ship was inspected on the 14th, and the prisoners all landed on that afternoon. No set of such men could have conducted themselves with greater subordination and good order than these did on the voyage out, and they were all landed in good health. Only one death occurred among the convicts, and no others. There have been four births on board.

The Norwood was here with convicts in 1862, under the superintendence of Dr. Watson, R. N., and she belongs to Messrs. J. H. Juscombe, of London.

Strong S.W. gales were encountered in the Channel, after leaving Portland on the 18th of April, with head winds as far as the Canaries. From thence fair average weather, with good trades. The Norwood had moderate winds in running down her easting, which she did between 39 and 40deg. S., until the 12th when a very heavy N.W. gale was encountered, which moderated early on the 13th, when she made Rottnest about noon.

Dr. Saunders has had charge of convicts for the first time, and the voyage has been most favourable with respect to the order, discipline, and cleanliness of the ship.[1]

He was employed as Staff Surgeon in the Devonport Yard until 1874. [6]

Staff Surgeon William McKenzie Saunders, M.D., has this day been placed on the retired list, and authorised to assume the rank of Retired Deputy Inspector-General of Hospitals and Fleets from the date of his retirement. [4]

[3] Journal of William Saunders on the voyage of the Norwood to Fremantle in 1867. Ancestry.com. UK Surgeon Superintendents' Journals of Convict Ships, 1858-1867 The National Archives of the UK (TNA).