Use the Search Box above to find your Hunter Valley Ancestor.
William Eckford arrived free on the Earl Cornwallis in 1801. On the voyage out he met Mary Horrell, a prisoner from Devonshire who was only 14 years old when she was convicted of stealing a muslin apron and handkerchief and sentenced to 7 years transportation. [1]

In 1813 in Sydney William Eckford was convicted of stealing three sheep and was sentenced to death. (The Sydney Gazette recorded him as William Hickford) [2]. The sheep had strayed into Eckford's flock and were killed and pickled by overseer John Johnston.

Both William Eckford and John Johnston were convicted and condemned to death, however William's sentence was commuted and he was sent to the Newcastle Penal Settlement in 1814.

Robert Whitmore was employed as pilot in 1815 however he fell into disfavour having grounded the Estramina in October and in correspondence from Commandant Lieutenant Thomas Thompson to Headquarters dated 27 October 1815, William Eckford was recommended for the position of pilot [6]......... 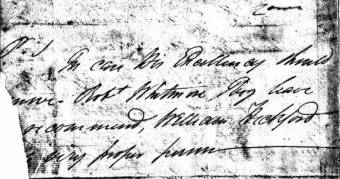 William Eckford's children were amongst the first pupils at the school in Newcastle in 1816. He was exonerated of the stealing incident in 1821. [1]


William Eckford was interviewed by Commissioner J.T. Bigge in 1820.

Sons Joseph and Peter were born in Newcastle, and his last daughter Mary Ann was also born there in 1820. She and a native boy perished at Newcastle in 1826 after a calamitous explosion in the settlement's store house blew the roof off the building. Mary aged 6 and her friend had been playing inside and both died a few days later. The native lad was buried in the Parsonage garden[3] and Mary was buried in Christ Church burial ground Read more about the explosion here.

In June 1828 the sloop Dove was lost off Port Stephens after experiencing strong winds. Seven people lost their lives in this disaster. The famous Lord Liverpool also ran into difficulties in these June squalls, and if not for the skill of Captain Livingstone the cutter would have been lost. William Eckford had attempted to come to the aid of the Lord Liverpool in his leaky old pilot's boat, ('a cockle shell' that should have been replaced eight months previously) but almost drowned in the process. [5]

William Eckford retired soon after this after many years service as a pilot. Few probably knew the harbour better than William Eckford, however perhaps this near calamity with the Lord Liverpool was the last straw. He was over 70 years old by this time and retired to Maitland where his sons John, Henry, William, James, Joseph and Peter resided. He received a pension of 4 pounds, 13 shillings and 9d. on retirement.[4]

In 1823 his name was included on the return of land cleared and other improvements made by settlers on Hunter's River and Patterson's River. His land was located in township no. 19, section 21/22. There was a barn on the land as well as a wattle and plaster cottage and a pig yard. (Fiche 3264; 4/7029E pp.2-3)