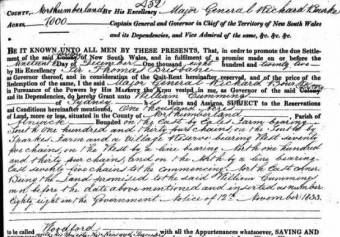 
This is probably William Cummings who arrived on the William Shand in 1822.

William Cummings didn't reside on this land as he opened a hotel in Sydney:

The Sydney Arms revived - William Cummings- late Passenger per Ship William Shand, begs most respectfully to announce to the Inhabitants of Sydney, and Public in general that he has taken the House lately known by the Sign of the Sydney Arms, and at present occupied by the Principal Superintendent of Police, which he intends to Open on or about the 20th Instant, as a respectable Coffee house, Tavern, and Hotel; and having had several years' experience in that line, W. C flatters himself be shall be able to offer supply accommodation, and attention, to the comfort of those Gentlemen, and Families, who may kindly engage in his support, as will ensure him their future favours and patronage [2]

The location of his grant can be seen at the bottom right of the map below.

The grant was situated on the road from Newcastle to Maitland. After leaving Newcastle travellers passed through Platt's Farm. They then continued along the track opposite Ash Island where Alexander Walker Scott had received a grant. Further on they would cross the Iron Bark Creek and then pass through a village reserve.

The road then entered through the farm of William Sparke and opposite this was a large swamp called in 1832, Barrahinebin.

Description from the 1832 Postal Directory: here the locations commence, and the whole country to the west, in what may be called the Delta of the Hunter, is one mass of grants and improvements present themselves on every side. A little further along the road Sparke's Inn was situated. At this point the road would separate from the course of the river which meandered further north east for five or six miles before meeting the Williams river and turning west once more. 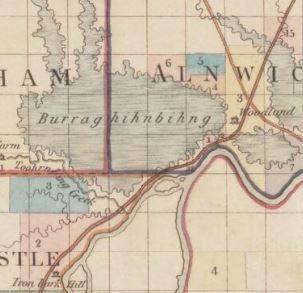 At Sparkes Inn travellers could take the road to Port Stephens to the north or to Wollombi to the south. On the right nearby this cross roads was situated Cummings grant.

In 1832 a cottage had been erected. Five or so miles further travellers would cross the bridge at Four Mile Creek before entering the township of Maitland. [1]