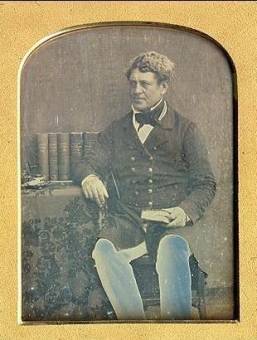 In 1821 he was serving on H.M.S. Beaver at St. Helena and was there when the death of Napoleon occurred. He kept a careful Journal of his time at St. Helena. Before the death of Napoleon Dunn visited Longwood and described it in great detail however he was disappointed not to have met with the famous French General. Captain Marryat of the Beaver obtained permission with one or two others to see the body of Napoleon and take likenesses and from this Dunn recorded the particulars of Napoleon in death.

Thomas Dunn entered the Navy as Assistant Surgeon on 6th April 1824, and joined the Sappho that month fitting for the Halifax station, where he was removed to join the Jupiter in January 1825.

He returned to England and graduated from the University of Glasgow with a medical degree in 1828 and in October 1828 he was appointed to the Ranger with Captain William Walpole and sailed for the West Indies from June 1829 until 1831, he was attached as hospital mate to the Jamaica Hospital. He then served in the Mediterranean aboard Edinburgh and was promoted Surgeon on 15 April 1835.

Thomas Dunn was employed as Surgeon Superintendent on the convict ship Augusta Jessie in 1840 and the Waverley to Van Diemen's Land in 1841. On the voyage of the Augusta Jessie he kept a Medical Journal from 1 October 1839 to 9 April 1840 -

On the 1st October 1839, I received my appointment to the convict ship Augusta Jessie, fitting out at Deptford for the purpose of conveying male convicts from Ireland to New South Wales. On the 8th, I proceeded to Deptford and reported myself to the Captain Superintendent and embarked on the following day.

This was Thomas Dunn's first voyage as surgeon on a convict ship but he thought the Augusta Jessie to have been a remarkably healthy ship. He attributed this to a number of factors, including, a good height between decks, a good supply of water and rations, the good behaviour of the guard, the crew and their officers, the prisoners being well disposed and the good weather.

To enforce cleanliness prizes were offered to the captains of the cleanest messes and for personal cleanliness. The prizes consisted of books of amusement or instruction supplied by the Inspector General of Prisons for Ireland, the merits of the winning individual were recorded in the flyleaf of each. About 40 junior convicts attended a school for an hour and a half each morning. [1]

He was on the List of Officers of the Royal Navy fit for service and employed on a convict ship in 1842. He married Janet Johnston in Glasgow in this year and his daughter Margaret Wingate Dunn was born in 1843.

From 3rd Feb 1848 until the spring of 1850 he was employed in the Powerful and the Queen on the Home and Mediterranean stations, and from 2nd May 1850 until 10th June 1854 at Haulbowline Hospital at Yarmouth. The National Archives hold his medical and surgical journals for HMS Queen (in the Mediterranean) from 1 October 1849 to 31 December 1850.

Deputy Inspector-General of Hospitals and Fleets

Thomas Dunn died on September 18th 1866 at his home at Dunallan House, Bridge of Allan, Stirlingshire. He is listed in the Medical Register of 1865 - Inspector General of Hospitals and Fleets, Bridge of Allan N.B. Qualifications M.D. 1828, Mast. Surg. 1860, University of Glasgow.