The Select Committee of the Legislative Council, appointed on the 15th June, 1852, 'to inquire into and report as to the best means of preventing the injuries likely to arise to the cities of Sydney and Newcastle by the influx of sand from the neighbourhood of those cities,' having taken evidence relative to the nature and extent of the evil and a suitable remedy, have agreed to the following report:

Extent of the Damage

Your committee consider it unnecessary to describe in detail the extent of the damage which has been sustained over portions of the outskirts of the the cities of Sydney and Newcastle, through the drifting of the loose sands which abound on the adjacent hills. They content themselves with stating that portions of streets, fences, and even houses, are completely buried under the drifts; that every dry gale is is productive of damage; that the evil is increasing with a rapidity, and has attained a magnitude, to excite serious apprehension for considerable portions of either city, unless means be soon adopted to stay its progress; and, that in addition to the damage to property in the two cities, their respective ports receive material injury from the quantity of sand which is swept into them during every heavy shower of rain.

But although the nature and extent of the damage is such, in the opinion of your committee, as to demand energetic measures of prevention, they see no reason to apprehend that their adoption would occasion any serious outlay. 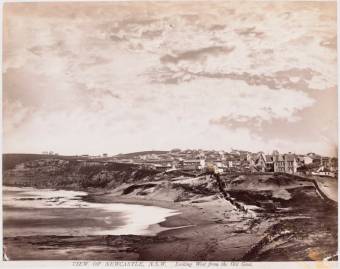 View of Newcastle looking West from the Old Gaol

Sand Drifts Attributed to the Destruction of Native Shrubs

Your committee would point out that the evil is to be attributed solely to the heedless and wanton destruction of the close undergrowth of native shrubs which originally covered the sandy tracts in question; but it does not appear from the evidence taken before them, or from personal inspection of the Sand Hills near Sydney by some of its members, that the portions so denuded and subject to drift, are of great extent; part of them, only, remaining unalienated.

To this portion your committee propose to confine their observations although it will be obvious that some legislative enactment will become requisite to compel the owners or occupiers of sandy tracts, in the vicinity of the two cities, which may be subject to drift over the adjoining land, to take measures to abate the evil, similar in effect to those which your committee are about to submit for adoption............

With regard to a portion of the tract of drifting sands near Newcastle there is a difference, requiring, in the opinion of your committee, the partial substitution of another means of reclaiming it.

The part in question is bounded on the east, to a certain extent, by the open sea, where the cliffs dip into the bottom of a small valley opening seawards. Across the mouth of this valley which has been quite denuded of its covering of shrubs, and which is perfectly exposed to the force of the south easterly gales, a wall of dry masonry, fourteen feet thick at its base, is in the course of being constructed, to prevent the further encroachment of sand from the naked beach, the site being about the level of high water mark. It is questionable in the opinion of your committee, whether this work, which is of an expensive character, and which will take much labour to complete, will long continue to answer its object, should it even, in the first instance, prove to be a sufficient obstacle.

Solid barriers of resistance to gales of wind are for the most part objectionable, because the current will overleap any such obstacle of moderate height, and fall with scarcely diminished force upon the space immediately beyond.

Your committee would suggest a much less expensive remedy, which, if carried out under the direction of an intelligent person, would soon oppose a barrier not liable to be surmounted, or to suffer dilapidation from the effects of time alone. Let two fences or scrubs of brushwood be erected from twenty to thirty yards apart, parallel to the beach, a little above high water mark, from six to ten feet high, sufficiently stable to stand the force of the strongest gales, and to protect from the trespass of cattle the space they enclose. Let them be rendered just close enough with branches of small leaved rigid plants, such as the varieties of native 'tea tea' (melaleuca and leptospermum), to break or moderate the force of a current of wind, without wholly obstructing its passage through them. It is desirable that they should be closer below than above. Let the space so enclosed be planted with the several varieties of native shrubs which naturally affect the margin of the beach. The seeds of such plants may also be sown in the manner recommended by Mr. Moore, and their germination, as well as subsequent growth, be greatly promoted by the use of small branches of native shrubs inserted into the sand in a sloping direction. The use of portions of seaweed and wreck, as well as the planting of the mesembryanthemum (Hottentot Fig or 'Pig's Face') and other creeping plants peculiar to such sites, might also be made a means to promote the progress of such a plantation.

There are everywhere along the coast examples of narrow ridges of sea sand covered with dense thickets of shrubs, even down to the very wash of the sea, which serve to protect effectually from the encroachment of the sand more open tracts immediately behind. The varieties of shrubs should be selected which naturally flourish in such situations; and there seems to be little doubt that, if protected for a few years in the manner above described from the violence of the wind, and secured from wanton destruction through the trespass of cattle or otherwise, a similar living screen for protection may be created and kept up at moderate expense, ordinary intelligence being observed in its formation. The committee urge that the operations of hacking the surface of planting the grass, and inserting the shrubs for protecting it, should be carried on simultaneously or the labor may be in vain.

To carry out their suggestions for the present, your committee would recommend:

That the sum of &pound250 be granted towards reclaiming the Sand Hills near Sydney, and the same amount for the like object at Newcastle; and that an address be presented to His Excellency the Governor General, requesting that he will be pleased to cause these respective sums to be placed upon the Supplementary Estimates for the year 1852.

That as soon as convenient the process of reclaiming the respective sandy wastes referred to the consideration of your committee be undertaken according to the plans described in the body of this report. Edward Flood, Chairman, Sept. 17, 1852