His name is forever preserved in the history of the Royal Navy as one of those who were severely injured in an explosion on board the Theseus in May 1799 by the bursting of shells that had been placed on the deck.

The accident occurred on 14th of May, at 9.30a.m., just as the Theseus, having on the preceding day been detached off Csesarea for the purpose, had discovered, and was beginning to chase, the squadron of M. Perree, twenty 36-pounder, and fifty 18-pounder shells, which had been got up and prepared for service, in an instant, caught fire and exploded. The ship was presently in flames, in the main rigging and mizen top,, in the cockpit, in the tiers, in several places about the main deck, and in various other parts. Captain Miller had just run aft from the forecastle, to ascertain the cause of the unusual bustle, when a splinter struck him in the breast, and he fell dead on the deck. The same was the melancholy fate of the ship's schoolmaster (Thomas Segbourne), two midshipmen (James Morrison Bigges Forbes and Charles James Webb), 23 seamen, one boy, and three private marines, who were killed, and six seamen and three private marines, who were drowned, by jumping overboard; total 40 killed and drowned.

The number wounded (the greater part of them shockingly burnt) amounted to 47, including two lieutenants (James Summers and Beatly), the master (Thomas Atkinson), surgeon (Robert Tainsh), chaplain (Frederick Morris), one midshipman (Charles Dobson), and the carpenter (mortally); making a total of 87 killed and wounded by the explosion.

The whole of the poop and afterpart of the quarterdeck were entirely blown to pieces, and all the booms destroyed. Eight of the maindeck beams were also broken; and, in their fall, they jammed the tiller. All the wardroom bulkheads and windows were blown to pieces, and the ship was left a perfect wreck; nothing, indeed, but the greatest exertions on the part of Lieutenants Thomas England and James Summers, Mr. Atkinson, the master, and the surviving officers and crew, subdued the fire and saved the Theseus. [3]

He was highly regarded by all who knew him and on leaving the Theseus in 1800 was presented with a gold watch, chain and seal - 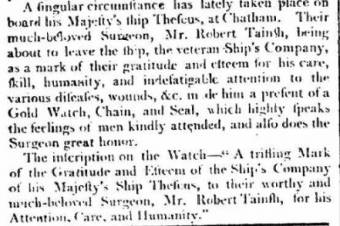 Robert Tainsh, the son of John Tainsh and Marjory Gentle was baptised at Crieff, Perth on 15 August 1768.[1]

May Tainsh, daughter of Robert and Elizabeth was baptised at Crieff on 22 October 1805. [6]

Robert Tainsh was employed as an assistant-surgeon at Greenwich Hospital.[9]

Robert Tainsh was employed as Surgeon to the Woolwich Division of Royal Marines when his wife Elizabeth gave birth to a son Robert Douglas Clarke Tainsh on 13 January 1814.[11] 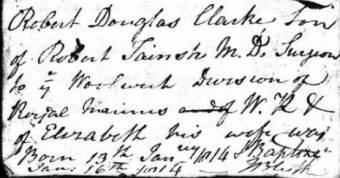 
1). John Tainsh of Crieff, writer and probably father of Robert, died in March/April 1821 after a short illness - His death is much regretted in the county of Perth, by many who will long remember the cheerful kindness of his temper in private life, his concilliating affabillity in the conduct of business, the warmth and activity of his friendship as well as the promptitude with which he engaged in everything connected with the publice welfare. The esteem in which he was held was testified by deputations from the different trades in Crieff walking in procession at his funeral. [13]


2). National Archives. Reference: ADM 101/123/2C Description: Medical journal of HMS Theseus for 19 August 1797 to 19 August 1798 by Robert Tainsh, Surgeon, during which time the said ship was employed in the Mediterranean and off the Western Islands.

3). In 1818 Robert Tainsh R.N., gave evidence before the Select Committee on Contagion of the Plague.

You were surgeon of the Theseus, I believe, in the Mediterranean, at the siege of Acre? - Yes, I was.

Did you see any cases of plague whilst there? - Yes.

Were they on board the Theseus? - Yes.

What countrymen were the persons infected? - There were three Englishmen and two Frenchmen.

Did they belong to your ship? - The three Englishmen had belonged to the Theseus formerly, and they had been taken in one of our gun-boats. They all appeared infected with the disease.

In what state of the disease were they ; had they buboes? - Only one of them had it of any great consequence. The other four were petichial slight cases. They were in a state of convalescence, and had rather the remains of the disease, than any any thing else. One of the Frenchmen, however, had buboes, and in a state of Suppuration.

Did that Frenchman recover ? - Yes.

After what lapse of time? - In about three weeks or a month. Both the French - men were sent on shore.

But was there any communication of the plague to any other persons on board the Theseus - No.

Were there any means of separating these plague patients from the rest of the crew? - Certainly ; all of them were removed into one birth on the starboard side of the ship, called The sick bay. Every part of their clothes that were on them on their coming on board, were immediately taken off and thrown overboard by my orders. Their bodies were shaved, and no hair left on them that could lodge moisture. They were then washed with soap and warm water, and new clothes were given to them : they had new bedding, new shirts, and every thing new within ten minutes after they came on board. -

Who washed them? - One man whom I persuaded so to do, by handling the patient myself, and applying the poultices to the buboes.

Had you communication with the ship's crew at the same time? - Yes; I examined them every morning, to see whether they had caught any infection, but none of them had.

What was your object in destroying their clothing in which they came onboard? - It was a mere caution to prevent those clothes from being again used. It was on account of no particular theory, but merely for cleanliness.

It did not arise then from the belief that it was of itself contagious - No ; and my hands being so much engaged with the knife at that time, I had not much opportunity of studying the disorder.

Did you touch the man who was so badly affected - Yes, I applied his poultices.

Did the same man attend upon him who had shaved him? - No, the barber of the ship shaved him; and the only precaution used was, when the attendants came out of the sick bay, I made them immerge their hands in a bucket of vinegar.

Do you suppose they always did that? - They were ordered to do so, and a sentry was placed there to oblige them so to do.

How near was the sentry to them? - He was on the opposite side of the ship, the sick bay generally taking in half the gally. [14]

[3] The Naval History of Great Britain

[10] A List of the Officers of the Army and of the Corps of Royal Marines By Great Britain. War Office (1821)

[14] Selection of Reports and Papers of the House of Commons