The Neptune was built at Whitby in 1810.[4] She was the next convict ship to leave England for New South Wales after the departure of the Batavia in November 1817.

The convicts of the Neptune came from districts throughout England.

In October, those men who had been tried at the Somerset Quarter Sessions at Taunton were removed from the Ilchester gaol in Somerset to the Justitia hulk on the river Thames to await transportation. Many were embarked on the Neptune from the Justitia on 21st November 1817.

John Ashley was one of the men from Somerset. He had been sentenced to death for forging a Waterloo ticket with intent to defraud John Somerton. He had an extraordinary career as a soldier prior to this incident and his story was repeated in all the newspapers in England........ He was in the engagement as a marine when Admiral Duncan captured the Dutch fleet; and was one of the chosen band who carried the trophies taken in that engagement to St. Pauls. He afterwards became a soldier in the 4th regiment and was with the Duke of York in Holland, where he formed one of the 42 that were sent to relieve his Royal Highness, at the time his horse was unable to pass a certain dyke. He was in the whole of the campaign with Gen. Moore, and with him when he feel at Corunna. He was at Copenhagen and Walcheron; and again through the Peninsula with Wellington, being at the battles of Barossa and Salamanca; at the sieges of Balajos, Bayonne, and many others. He was then drafted for America; was at the burning and sacking of Washington with Gen. Ross. He came home and on the 8th day embarked for service at Dover; he landed at Osland, and arrived in the neighbourhood of Waterloo on the evening of the 16th lay on his arms all night, formed in the morning early and got on the plains of Waterloo; he fought on the 18th until pierced with five musket shots when he fell and was removed, with others to the Elizabeth Hospital at Brussels where he remained three months.

The Guard was commanded by Lieut. Bunney and Serjeant Bissett.

The Neptune departed the Downs on 20th December 1817.

Surgeon Superintendent Thomas Reid was born in Ireland in 1791 and educated in County Tyrone. He entered the Navy around 1811 and was admitted to the Royal College of Surgeons in London in 1815. He was a prison reformer and at the instigation of Elizabeth Fry made voyages as surgeon-superintendent on this voyage of the Neptune, to Sydney and the Morley, to Hobart Town and Sydney in 1820. He died in London in 1825.[3] The prisoners by the Neptune were fortunate in having him as their surgeon on the voyage to Port Jackson. He was humane and treated the men fairly throughout the voyage. Read his journal of the voyage of the Neptune.

Thomas Reid's journal of the voyage has a list of the Crimes of the prisoners under his care: 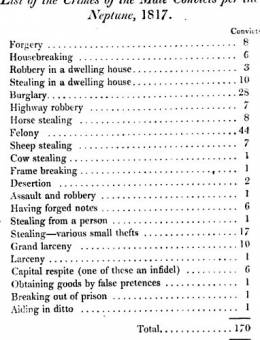 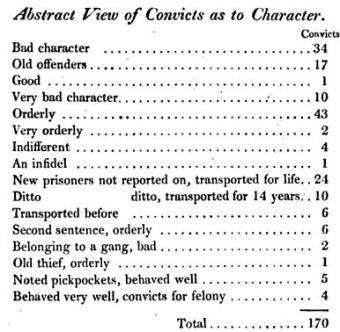 Reid's first duty (before departing) was to draw up regulation for guidance of the prisoners: 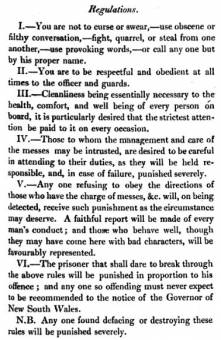 The next duty was to instigate a moral and religious system and with this in mind he brought with him a number of bibles and prayer books for the convicts. The ship was kept clean, ventilated and also warmed by stoves if the occasion arose. Once the ship got underway Mr. Reid began to attend to the twenty three junior convicts, all of whom were under 20 years of age, some as young as 13. He mustered them all and questioned them individually and found to his dismay that only five could read and write. He immediately set up a school on board and placed the young men under the care of a convict appointed as schoolmaster. The school continued for the entire voyage and at the end each boy was literate.

Thomas Reid recorded details of provisions for the journey of the Neptune: - The following is a correct copy of the list of extra stores and necessaries allowed on board the Neptune in which ship I was surgeon and superintendent in 1817, and is an undeniable proof of the humane concern Government takes in the welfare of those unfortunate persons:

Navy Office - A List of Stores shipped on board 28 Nov. 1817. The Neptune Convict Ship for the use of 170 male convicts, guard and passengers, during their voyage to New South Wales. And of clothing for the use of the convicts upon their arrival at the colony.

Clothing for the Use of the Convicts on their Arrival. Yellow kersey jackets, 170: waistcoats, 170: raven duck trowsers, 170 pairs : for use during voyage, 170: shirts, 510: stockings, 340 pairs: shoes, 170: woollen caps, 170: and neck-handkerchiefs, 170. In addition to the above, 2 cots were also supplied in case of fractured limbs, besides a proper stock of medicines from the Apothecaries' Hall.

When the Neptune reached the Cape, Thomas Reid and Captain Carns were disturbed to find that sixteen men who had escaped from New South Wales in the vessel Harriet and been apprehended at the Cape and were to be sent on the Neptune. Five women were also on board the Harriet however they were to be left at the Cape.

Thomas Reid learned that the absconders had contrived to secrete themselves in the hold of the Harriet where they lay concealed for more than a month before they were discovered; having subsisted that time on some 'miserable matter' they had brought away with them and on a small store belonging to the owner to which they had penetrated privately. Facilities and supplies on the Neptune were limited but they were left with little choice but to take the men on board. Carpenters were employed to build extra facilities required by convicts and soldiers.

The appearance of these sixteen men when brought on board the Neptune was 'extremely forbidding'. They were kept separate from the other prisoners, totally and effectually excluded from the society and conversation of the original men. Religious books were provided and they were allowed to bathe and exercise in the open air. They were not allowed any wine, however the 'old' prisoners requested permission to share their allowance of wine with the new prisoners which Reid allowed.

The Neptune entered the Heads of Port Jackson at 10.30am on the 5th May 1818 and shortly afterwards the pilot was received on board. At noon they anchored to wait for the tide and at 12.30 the Naval Officer boarded.

Captain Carns accompanied by Thomas Reid, then went on shore to deliver dispatches to Governor Macquarie.

On arrival the invalids were removed to the hospital on shore and a few days later the 16 absconders embarked at the Cape were taken ashore. The Sydney Gazette gave the following account of the punishment of the sixteen men who returned to Australia on the Neptune:

The male prisoners who had effected their escape from hence in the Harriet, and returned by the Neptune from the Cape, were this day brought before a Bench of Magistrates, and sentenced to receive one hundred lashes each, and worked in the gaol gang for 12 calendar months. It appeared from a written statement transmitted from the Cape of Good Hope, that the delinquents had not made their appearance for a considerable time after the vessel's departure from hence, although it was known by some of the crew they were on board; and, but for timely information being given to the Commander, the consequences might have been very serious, as it was then represented to have been their intention to take the vessel, after the cargo had been received on board at the Cape, and carry her into South America; in which design they would very probably have been aided by seamen and other persons on board; with which assistance they could scarcely have failed in accomplishing their purpose. The result of this discovery was, that the troops, in concert with the passengers, were compelled constantly to keep the deck till they reached the Cape. [1]

Following is a list of the absconder/ prisoners' names:

Thomas Reid returned to England via Batavia on the Neptune. He took with him dispatches to Earl Bathurst and recommendations from Governor Macquarie....

Mr. Reid, having taken singular pains in reforming the manners of the unfortunate People, he had in Charge as Surgeon Superintendent, by Inculcating Religious Principles into them, and even instructing Several of the Youths among them so far as to enable them to read the Scriptures, has shown a goodness of Heart and disposition meriting of every commendation, and I feel that I am doing an Act, which your Lordship will approve, when I take the Liberty of recommending such a man as Mr. Reid to Your Lordship's kind Favour and Protection [2]

The Neptune, under Captain William McKissock returned to New South Wales with convicts in 1820

1). Samuel Clift arrived as a convict on the Neptune. He became a business man, grazier and pastoralist at Maitland and Liverpool Plains

2). Read about Henry Angel, convict of the Neptune - Australian Dictionary of Biography

3). Convicts and passengers of the Neptune identified in the Hunter Valley

4). Robert Nevans arrived as a convict on the Neptune. He was punished severely for attempting to Escape from the Colony by Boat in August 1818. 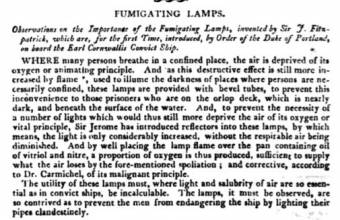