Use the Search Box above to find your Hunter Valley Ancestor.
James Mein and wife Susannah arrived on the Coromandel in 1802. John Howe and James Mein's brother Andrew Mein also arrived as free settlers on the Coromandel.

James and Susannah Mein resided at Portland Head where he was a respected member of the Presbyterian church. 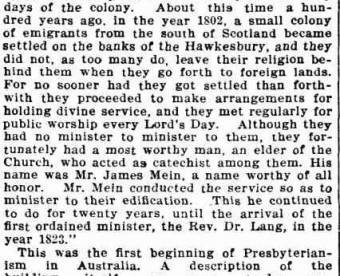 He was granted 640 acres on 28 April 1824 and applied to have cattle sent overland to his estate however never resided on this land. He died in 1827 and his nephew John Stuart Mein of Scotland, son of John Mein, inherited the land.

On arrival John Stuart Mein took over his inheritance:

Notice - I the undersigned, hereby prohibit all persons from cutting timber, running cattle or otherwise trespassing upon my Farm of six hundred and forty acres at Cumnaroy, Hunter's river, granted by Governor Brisbane to the late Mr. James Mein of Portland Head, without permission from myself, having administered to the effects of my late Uncle and Aunt, as Heir at Law......John Stuart Mein, Sydney 14 April 1835 (Sydney Herald 20 April 1835).

James Mein, the original grantee, was an elder of the Presbyterian Church and over one hundred years later his work and dedication were still remembered. At a celebration of the 101st anniversary of completion of the church at Ebenezer in 1910, the following address was given {extract}....

It was in 1802 the forefathers of many of those present met under the trees on that very spot and held their first service. Those sturdy pioneers brought with them the spirit which had made their forefathers so strong and good. They set about building the church (Ebeneezer) in which they were assembled in 1806. They did the work with their own hand and had many difficulties to surmount, and it was not till 1809 that the building was finished. They laid the foundation of a church which had since spread far and wide in Australia. Rev. A. A. Aspinall in an interesting address said that for a number of years he had had a yearning to come and see that historical building - the cradle of Presbyterianism in Australia and it was with delight that he accepted the invitation to be present that day. He had many talks in his youthful days with the Venerable Dr. Lang about Ebenezer. In wandering among the gravestones that day he came upon one that marked the resting place of one whose memory would always be cherished in the memories of all Presbyterians in Australia. He referred to James Mein. Dr. Lang had told him a story of the man who first raised his voice in public worship on that very spot which was indelibly impressed on his memory. James Mein was an elder of a church at Home. On that very spot where they were assembled James Mein had a dream - a very vivid dream - which impressed him very deeply. He awakened, but slept again - to dream the same dream and awakened. He slept again and dreamed the same dream a third time. He then got up and wrote in the fly leaf of the family bible a record of the dream. It was that the minister of the old church had died - and in his dream he saw the people present and heard the addresses given. In those days it took nine months to get a letter from Home- but sure enough in nine months he got a large blacked edged letter telling him of the very circumstances he had dreamed and recorded in the fly leaf of the bible, and the very same people he saw in his dream were those taking part in the burial service so many thousands of miles away. James Mein was a man who gathered his fellow religionists around him and read sermons and led the praise to Almighty God over 100 years ago on the spot where they were now assembled. - Windsor and Richmond Gazette 29 January 1910.