Edward Leah was employed as assistant surgeon on H.M.S. Albion at the Battle of Navarino which was fought on the 20th October 1827. He produced an account of two cases of tetanus that occurred following the Battle which he outlined in great detail, all from memory, as he had not kept a journal -

Cases of Tetanus. By Edward LEAH, Assistant-Surgeon of H. M. S. Albion. THE following cases of tetanus occurred on board H. M. S. Albion after the action of Navarino. In one it succeeded a gun-shot wound on the seventh day, and proved fatal with great rapidity, although the system was brought effectually under the action of two remedies, which are more relied on by surgeons than any other in this dreadful disease. In the next, the spasmodic affection began at a much later period, having been produced by amputation at the shoulder joint, which was rendered necessary by a severe cannon-shot wound. In this case the spasms never attained a great height, and although the treatment was chiefly confined to the moderate use of opium and a careful attention to diet, regimen, and the general state of health, the patient recovered.....continue

He was employed as Surgeon Superintendent on the emigrant ship Mandarin in 1838. The Mandarin arrived in Port Jackson on 18th October 1838. 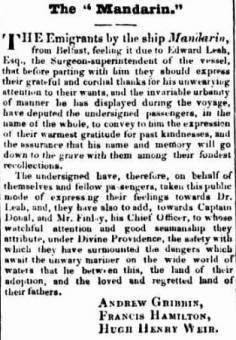 He was remunerated £100 for his services on the Mandarin. [3]

Edward Leah recorded in his journal the daily routine he had established for the women - With respect to moral discipline I found it necessary to give them my constant attention and to adopt a straight forward impartial line of conduct. I appointed two Matrons to have a general superintendence on mess woman to each mess of 8 persons, three School Mistresses and one Nurse for the Hospital. A copy of the scale of victualling with the quantities for each mess was given to each matron to be hung up in their respective berths. Two persons attended the serving out of provisions every morning and this was commenced as soon after 8 o'clock as circumstances would admit of. The cooks of whom there were two were allowed on deck at 6 am to prepare the breakfast the fuel being arranged under the boilers on the previous evening. At 7.30 all the women were allowed on deck to wash themselves and at 8.15 they had their breakfast. Immediately after breakfast they commenced cleaning the deck under the superintendence of one of the Matrons, one person from each mess taking her turn to clean for the day if the weather was fine [4]