Use the Search Box above to find your Hunter Valley Ancestor.
David Stolworthy married widow Maria Carey on 19th April 1835 at St. Mary's, Lambeth, England. [1] Maria was the only daughter of Major General Charritie of 32 Bryanstone square, London. [2]

He became insolvent in 1836 with the matter settled in 1838.......
The Court for Relief of Insolvent Debtors - At the Court House at Horsham in the County of Sussex, on the 7th day of July 1838 - David Stolworthy, formerly of No. 4 Chester place, Borough road, Southwark, Surrey, then of Horsham, Sussex, Assistant to a Surgeon and Apothecary, and late of Petworth Sussex, Surgeon and Apothecary and Surgeon to the Petworth Union.[3]

He arrived in Sydney via Port Phillip as Surgeon Superintendent on the emigrant ship China in June 1840. Maria Stolworthy arrived on the Earl Grey as a cabin passenger in 1841. [4]

In 1842 he was offering his services as a medical practitioner at Patrick Plains. 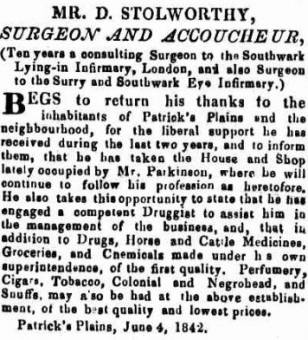 He suffered in the 1840's financial depression and for second time in his life became insolvent. His furniture was sold at auction, although perhaps he retained his medical instruments.

He remained in the district continuing his medical work and entering into the town life. In September 1844 he gave a speech at the Teetotal Party and attended a dinner at the Forbes Hotel to celebrate the anniversary of the colony in January 1847. Following is an account of the celebration:

'Wednesday last being the anniversary of the colony, a splendid dinner was laid out by mine host of the Forbes Hotel. In consequence of the unfavourable state of the weather, and the short notice that was given, the room was not so full as it would otherwise have been. Mr. J.J. Harpur was in the chair, and Dr. Stolworthy officiated as vice president. Several loyal and Australian toasts were given and responded to; and some really eloquent speeches were delivered by the chairman, the worthy Doctor, Mr. Maxwell, and others. Mr. Rotton spared no expense to have the dinner served up in first rate style, every article having been placed on the table that could tempt the appetite; the wine was also excellent. After the tables were removed the music commenced; but the streets being so shocking muddy, the ladies were afraid of wetting their pretty little feet and so to the great disappointment of the anxious gentlemen, after a few tunes were played, the company returned home much earlier than they would else have done.' [6]

Soon after this David Stolworthy was presented to the Governor Sir Charles Fitzroy at Singleton.[7] He was also Steward at a dinner later held in the Governor's honour in a room at the rear of Mr. Ledingham's 'Surveyor General Inn'; and after dinner gave a speech on behalf of the Stewards there who had 'got up a dinner so extensive in a place with such limited means at their disposal.'

In 1848 the following account was given of Dr. Stolworthy's experiments with chloroform on two gentlemen of Singleton.

'From one he extracted the stump of a tooth without pain being felt by the party, although something resembling a crush was felt. But as these remarks are intended to illustrate its effects, we would add the particulars of its action. It was exhibited in a piece of cotton stuffing, folded in a handkerchief, which was considered better than a sponge, and appeared so by the fact that it required time to produce its effect, by which means it was more easily governed in its application, and served as a check upon any dangerous effect. When first applied it nearly produced choking, but steadily continued, was followed by an apparent stream of luscious sweetness passing down the throat; after that commenced its stupefying action, like a sudden quickening of the pulse from the extreme points of the body to its centre, violent but not painful, which gradually melted away into nearly insensibility. So far the party himself maintained the power of application after which it required an assistant.

The stump was then lanced and withdrawn without an apparent sensation; neither did the most violent pinching appear to create any emotion. Previous to the extraction of the stump violent vomiting came on, of which, however, he was not aware; but this, we think, arose from a disordered state of the stomach. It was some time before he fully recovered the effects of the experiment. the quantity employed was not more than 10 drops, which appears sufficient for the purpose, when the party using it does so without fear. The exhibitions to the other party were those of pleasure, although it was never carried so far as total insensibility; but he is at any time ready and willing to take the chloroform. From the results we can confidently state that, with moderate caution no serious effects will follow its use; although at the same time we cannot admire a taste for its use only for amusement. As the article is very dear, we would recommend economy in its use, and point to the fact that 10 drops properly applied is sufficient, and if not, it is easily renewed.

In January 1849 David Stolworthy assisted by Dr. Glennie performed an amputation below the knee on Peter Gibbon who had been injured when his leg was crushed against a tree by his horse. Gibbon, a 35 year old shoemaker was said to have evinced considerable fortitude prior to the operation which was performed in about 2 1/2 minutes. He had been given only a light dose of Chloroform due to his debilitated state and 'gave not the slightest evidence of pain or suffering during the various incisions of the limb, consciousness only returning during the application of the saw'!

Administration of chloroform was not always successful. In 1849 a puzzling disease became prevalent in Singleton, amounting almost to an epidemic. It affected the fingers with abscesses in the joints and palm of the hand to such an extent that in several cases amputation was found to be necessary. Dr. Stolworthy performed the amputation with the aid of chloroform in most cases, however Patrick Kelly, reacted badly to the chloroform - 'a great nervous excitement was produced by a rush of blood to the head and he became delirious'. Despite earnestly entreating Dr. Stolworthy to again try the chloroform the good doctor refused and the operation was performed without. Patrick Kelly submitted to the ordeal with great fortitude and resolution. Dr. Stolworthy 'removed the metacarpal bone close to its articulation at the wrist joint' and Kelly was left with a small but useful hand.

On the 31st October 1849 David Stolworthy's beloved wife Maria passed away. Two years later he embarked on a voyage to China to restore his health. He returned to Australia in April 1852 when a public dinner was held at the Caledonian hotel in Singleton in his honour. Many of the district's residents were present.

In 1854 he sailed to Paris and London......The Lancet. He returned to Australia on the Ellenborough on 31st October 1854 ....The Ellenborough, Captain Thornhill from Southampton July 14. Passengers Mr. James H. Atkinson, Dr. Stolworthy, Surgeon Superintendent, and 399 immigrants. The Ellenborough has had rather a long passage of 107 days from Southampton, which has been occasioned by her being very deep, having encountered most dreadful weather, and losing a number of her spars on the passage. She brings 399 immigrants principally English, and all in good health, 100 of whom are for the Railway Company, the remainder are chiefly agricultural labourers. There have been 7 deaths and 2 births on board during the voyage. We believe the immigrants speak in high terms of the kindness and attention shown them by Dr. Stolworthy. The cargo of the Ellenborough consists principally of iron for the Railway company.[8]

The passengers presented an address to David Stolworthy Esq., F.R.C.S.

Sir, We, the immigrants under your care, return you our heartfelt thanks for the kind attention, the untired exertions and undeniable skill you possess, your system of regularity, your watchful eye for morality, kindness to all, no matter what country or creed - we candidly believe you have done your duty, honourably and skilfully, as Surgeon Superintendent. We likewise feel satisfied that no professional man could do more for our health, comfort, discipline, and morality. We have seen what you have gone through, late and early, always kind, willing, and watchful of us, though far from our father land. No language can express the feelings we entertain towards you; we are convinced were it not for your skill and attention half of us would not have survived to reach our destination; for the poor infants that died you did your utmost to recover, though we consider it was out of your power, being in a delicate state of health previous to our departure. The vessel being so heavily laden, and so deep, causing her to pitch and roll most fearfully, her ports and scuttles constantly leaking, creating so much damp, and owing to their being frequently under water, from this cause you were scarcely ever enabled the whole voyage to open them to produce proper ventilation. That all your time was occupied for the relief and comfort of adults and children. Your kindness, generosity, and humanity has gained the esteem of those who address you, wishing you a long and happy life in this world and everlasting happiness hereafter. [9]

Soon after landing he set up practice in O'Connell Street, Sydney next to the Australia Club. [10]

David Stolworthy died by his own hand in 1857. The inquest into his death was reported in the Empire in February 1857....

Considerable sensation has been excited in Sydney by two remarkable suicides - Dr. Stolworthy, an eminent medical practitioner, was found dead in his bed on Monday; and Miss Emma Kisterton, a respectable young lady who had occupied the position of governess, died the following day, both having evidently terminated their existence by poison.

Benjamin Hodgson, the servant of Dr. Stolworthy gave a lengthy deposition as to what had occurred in the last few days. Mary Wiseman, the betrothed of David Stolworthy also gave evidence and it was revealed Emma Kisterton destroyed herself after she found out about the death of David Stolworthy.

David Stolworthy had been in financial difficulty and the jury returned the verdict that he destroyed himself by laudanum while labouring under temporary insanity, brought on by embarrassed circumstances. It was found that no improper intimacy had taken place between Stolworthy and Miss Kisterton.. Read the full inquest here