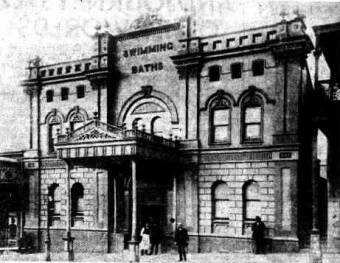 IN THE 1880'S NEWCASTLE BATHS were indoors. On the eastern side of Newcomen Street between Scott and Hunter Streets there was, at one time, a spring from which the early residents of Newcastle got their water supply. The location can be seen top left on Armstrong's 1830 Map of Newcastle noted as 'wells of beautiful water'. Later it became known as the 'water reserve' and was vested in the council. The area was 55ft by 125ft.

In 1886 it was the site of the Fire Engine Station. (Mahlstedt & Gee Fire Insurance Map)

When water was laid on through the town, this land developed into an untidy vacant block. In 1887 it was decided to erect up to date salt water baths on the site. The baths were completed and opened on February 14 1888 by the Mayor of Newcastle Ald. G.W. Webb.

With the advent of municipal government (1859) a large proportion of the inhabitants considered it a favourable opportunity for establishing public baths. It was contended that the progress of improvement should not be limited to the repair of the streets, but should extend to other important subjects, such as bathing accommodation and recreation grounds. The council was to take steps to procure land grants for these purposes, to be vested in the corporation. How they succeeded in their labours is a story well worth telling after dealing with the first city bathing places.............

In the early convict days there was a plank pathway from the end of Zara street running down to the white sandy beach where a long wharf, built on trestles ran out into the harbour. At the extreme end of this wharf there was a fairly good sized public bath erected. In the forties this bathing place was demolished and the site became the pilot boat harbour.

At this early period there was in existence Captain Wallis' famous 'Bogey Hole' baths, reserved for the military on the ocean side of Sheep pasture hill now called Shepherd's hill. These baths were hewn out of the solid rock by the soldiers, and not by convicts as has often been represented. The semi-circular road on the reserve leading to them was made at the same time. In 1863 these baths were vested in the council for the use of the inhabitants.

The most commodious and purest bathing accommodation accorded the public was the dedication of six acres of the rocks below Signal Hill, for public baths. The dedication took place on January 12th 1883, during Mr. William Laing's Mayoralty, but the building of the stone breakwater around them was carried out during 1885 when Dr. C.W. Morgan was Mayor and it cost the council a few thousand pounds. The original railway line was left on top of stone enclosure, and the tremendous seas breaking over the heaped stones, twisted the rails into a corkscrew shape, and washed away from underneath the line many of its huge boulder stones. Twenty years ago, during a storm of lightning and rain, the precipitous cliffs overhanging the baths gave way and fell with a mighty splash into the centre of the basin and to some extent reduced its dimensions. Several soldiers had a narrow escape at the time, having only a few minutes before the fall of the rocks been bathing exactly where they fell.

In 1888 the corporation erected at a cost of 4000 pounds more secluded and attractive baths in the heart of the city, in Newcomen street. The building was a handsome structure, 40 feet in height and nearly 200 ft in length and about 68 ft in width. The swimming basin was 155ft long by 55ft wide, and had a depth from 3ft to 6ft of pure salt water, continually flowing though water mains between the baths and engine works erected on the reef of rocks immediately below the old gaol hill now the tramway terminus. There were dressing compartments for 150 bathers besides 25 private baths wherein hot and cold salt water baths could be obtained. At night time the baths were lit with electric light and even the bottom of the basin had several arc lights inserted therein, which gave a brilliant illumination underneath the water. For a long time these municipal baths were a great feature, and attracted crowded attendance, but the novelty died out, and they languished for want of support. Surf bathing has secured a positive preference and there are at times immense crowds bathing along the ocean beaches of the municipality.

In the eighties the ladies baths on the ocean beach below Ordnance street, were renovated, and furnished with bathing requisites by the council. At the same time the council deepened and enlarged the Bogey Hole, and put round it an iron railing for safety. Within the last few years the ocean beach from the end of Telford Street to the end of Zara street has been gazetted a public bathing place. Since then the council has effected extensive improvements along the beach. - Newcastle Morning Herald 7 June 1909

1). Soldiers Baths - Once a popular bathing pool, the soldiers'; Baths at the foot of Signal Hill have been reclaimed by the sea. While perhaps noticing the unusual formation of the rocks, the stranger will little think that this was once the scene of great sport. Built by James Russell and Company for the Newcastle Council over half a century ago, the Soldiers' Baths were a free bathing place for the public. They were also used by the soldiers barracked at Fort Scratchley, hence the name. In shape the baths were a rude semi circle, the wall being made by piling rocks loosely in the form of a breakwater. Heavy seas have knocked some of the rocks out of position, but it is a credit to the builders that anything remains after 50 years of battering. Dressing sheds were also provided by the Council, but these were either smashed by heavy seas, or helped to bring many a cottage kettle to the boil. - Newcastle Morning Herald - 11 October 1933

5). Alderman Christie to move 'That a plan and estimate of cost be prepared by the Surveyor of an accessible footway by path steps or otherwise, leading from the top of the cliffs at a point near the end of Horseshoe carriage drive to the bathing place known as the Gulf and Reef, and that the same be as inexpensive as possible consistent with strength, durability and safety. Newcastle Morning Herald 21 January 1884

6). It is a pity the rules regulating the hours during which men and youths are allowed to bathe in the surf behind the Hospital are not more stringently enforced. ON Sunday afternoon, when a good many ladies visit the beach, it is disgraceful to see men bathing or walking on the sand in a state of nudity. If people wanting to have a dip in the sea in the daytime would go to the bogey hole or the gulf and reef, no one could object to their nakedness; but the disregard of all decency on the much frequented beach near the Hospital causes serious annoyance. A party of ladies yesterday after noon came unexpectedly on about six men as nude as Adam before the Fall, disporting themselves on the sand, and they had to wait til the fellows were dressed before they could go on the rocks behind the Fortification Hill which was their destination. - Newcastle Morning Herald 12 May 1884


7). The Square Hole - This was a favored bathing place for children for very many years.
It is believed to have been excavated from the rocks close to where the Ocean Baths stand today, by an old resident of the early sixties. He also built a dressing shed there but it was washed away by heavy seas. For many years the pool was used by the youngsters and became known as the 'square hole pool'...... 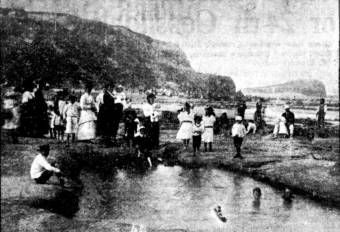