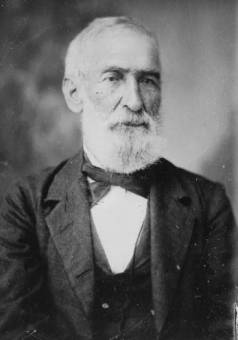 
Alexander Skinner was born in Rosshire in Scotland. He trained as a physician and surgeon at the University of Glasgow.

Alexander Skinner arrived in 1839 as surgeon superintendent on the emigrant ship Lady McNaughten. The Sydney Herald reported......The emigrants by this ship arrived in a very healthy state. The cleanliness of the vessel and the general appearance of the passengers reflect great credit on Captain Hustwick and Dr. Skinner, the Surgeon Superintendent. [1]

He opened a medical a practice at Jerry's Plains in 1839 stating in his notice of commencement that he had extensive experience in Scotland.

His wife Hughina who had accompanied him to Australia died in 1839 at Jerry's Plains. He re-married Elizabeth Shannon in 1842 at Mt. Keira.

Alexander and Elizabeth Skinner resided at Manilla in the Phillipines in the 1840s. Three of their children Alexander b. 1843, Elizabeth b. 1846 and Charles b. 1847 were born in Manilla.

When he returned to Australia he first went to Melbourne and then Grafton. A daughter Jane was born at Grafton in 1852.

In 1852 he established a practice at Grafton: Mr. Skinner, surgeon (formerly of Patrick's Plains and latterly of Manila, Philippine Islands) will begin practice at Grafton, on or about the 1st proximo. Mr. S. will have a dispensary where families and stations can have their medicine chests replenished. An Hospital will be opened shortly. Mr. S. has a supply of Vaccine Lymph. [2]

By 1854 he had moved to Glen Innes and after many years to Inverell where was medical registrar from 1886 to 1895.

Alexander Skinner died at his residence Airlie Brake near Inverell on 18 January 1899. ll on 18 January 1899. The deceased was one of the oldest members of the medical profession in the colonies, having taken his degree in 1837. He had for some time been incapacitated, and many years ago resigned from active practice. He was 88 years of age and his death was due to senile decay. (3)

The Sugar Doctor: The Story of Dr Alexander Skinner By Lois Shepheard